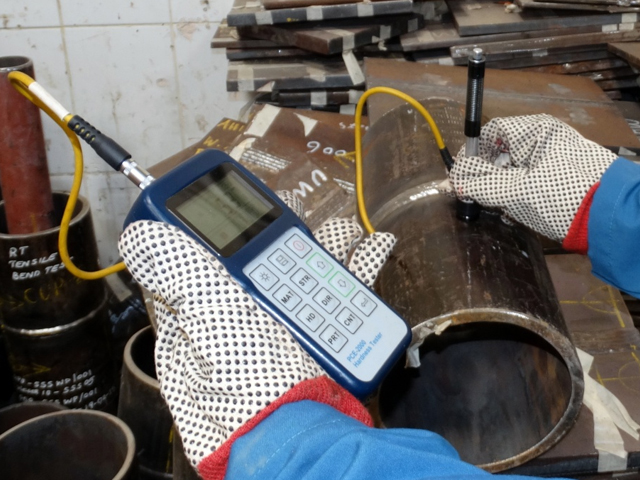 The hardness of metallic materials is tested in hardness testing (HT). Hardness is defined as the resistance of metals to the indentation of a harder object.

The so-called hardness of metals is tested in hardness testing (HT). Hardness is defined as the resistance of metals to the indentation of a harder object.

Prior to the start of testing, the best possible preparation of test points is essential; the surface must be dry and free from contamination and rust.

Then, the tester is calibrated according to the characteristics of the test object, the indenter is driven into the previously designated test points, and we conduct hardness testing (HT); the average of at least three indents gives the testing result.

When the hardness of a low-weight or thin-wall specimen is tested, incorrect results may be obtained owing to vibration produced as the indent hits the specimen, it can therefore be said that when the weight of an object to be tested does not exceed 5 kg, a stable support of an appropriate weight should be secured at the testing points; similar preparation is needed for testing thin-wall objects.

Our inspectors, owing to their technical knowledge, thoroughly prepare and conduct hardness testing (HT) in order to obtain as accurate testing results as possible.

Find out more or adjust your settings.

This website uses cookies so that we can provide you with the best user experience possible. Cookie information is stored in your browser and performs functions such as recognising you when you return to our website and helping our team to understand which sections of the website you find most interesting and useful.

Strictly Necessary Cookie should be enabled at all times so that we can save your preferences for cookie settings.

If you disable this cookie, we will not be able to save your preferences. This means that every time you visit this website you will need to enable or disable cookies again.