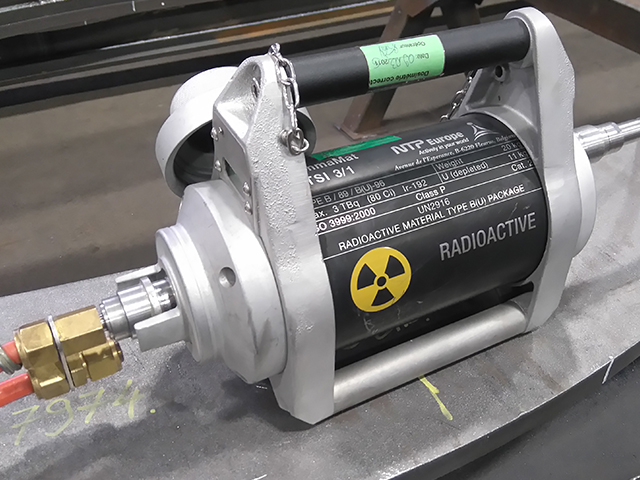 What is radiographic testing (RT)?

A radiation source (Ir-192 or Se-75) or an X-ray machine is used in radiographic testing (RT).

Radiographic testing (RT) is based on the following physical principle: Short-wave radiation that can penetrate materials to be inspected exposes a radiation-sensitive film or a digital imaging plate (CR — Computed Radiography) and forms a shadowgraph of the parts under examination depending on the differences in absorption; thus, volumetric defects in the inspected materials can easily be detected. Radiographic testing procedure provides a permanent record of the inspection, as films on which the result of testing is recorded and digital radiographs obtained by using CR technique can easily be stored and sufficiently reveal defects.

Our laboratory has digital radiography (CR) equipment as well.

Most material testing methods, including radiographic testing (RT), can be used in several areas, such as the following:

Radiographic testing (RT) offers a number of advantages over other NDT methods. Radiographic testing provides a permanent record of the inspection, as films or digital imaging plates on which the result of testing is recorded can easily be stored and sufficiently reveal defects. This testing method can be applied to inspect thick- and thin-wall test pieces, regardless of materials quality. In addition, radiographic inspection is a reliable and safe material testing method.

The sensitivity of radiographic testing (RT) to be carried out is affected by several factors, such as the thickness of the material under test, the quality of the used film or imaging plate, and the distances between the test piece, the film and the radiation source.

Each radiographic inspection is conducted by our highly-qualified material testers who always endeavour to obtain as accuratetesting results as possible.

Find out more or adjust your settings.

This website uses cookies so that we can provide you with the best user experience possible. Cookie information is stored in your browser and performs functions such as recognising you when you return to our website and helping our team to understand which sections of the website you find most interesting and useful.

Strictly Necessary Cookie should be enabled at all times so that we can save your preferences for cookie settings.

If you disable this cookie, we will not be able to save your preferences. This means that every time you visit this website you will need to enable or disable cookies again.